Historic St. Mary's City, in St. Mary's County, Maryland, is the birthplace, so to speak, of the State of Maryland.

George Calvert, a secretary of state to James I, was forced to resign his position due to his conversion to Roman Catholicism (which was technically illegal to practice), but was given the title of the first Lord Baltimore (named after the Irish city) by the king due to his previous service. He campaigned for a charter in the mid-Atlantic region of North America in order to set up a colony for disaffected English Catholics. His charter was eventually granted, although shortly after his death, and it was instead given to his son, Cecil Calvert. Maryland's charter set up a proprietary colony under the Lord Baltimore, with the condition that he govern with the advice and assent of the freemen of the province. Maryland was not an English (or British  - there was a union of crowns, but not parliaments between England and Scotland) colony (in the traditional sense of a colony), but a self-governing territory.

After landing in Maryland in 1634, in what is now St. Mary's County, the settlers soon set up their capital nearby, in what they would call St. Mary's City. The capital of Maryland moved in 1695 (1694 if you are using the Julian calendar as they did at the time) to Annapolis, but today a historic park has been set up at the location.

One of the first places to see is the reconstruction (and it is important to note that everything depicted is a reconstruction as the original, mostly wood, buildings have been lost to time) of the original State House from 1676. In this building the lower house of the Assembly, the upper house (which was picked by the governor), the Provincial Court (Maryland's then highest court) and the St. Mary's County Court all would have met. Before the construction of the State House they would have met in private houses and bars. 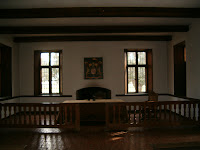 The building is open to visitors. You can explore the first and second floor. On the left is a picture of the first floor where the lower house of the Assembly would have met. It is also the place where the court would have sat as well. All capital cases in the province would have been heard here(in the Provincial Court), including the witchcraft case against Rebecca Fowler of Calvert County, which resulted in her conviction and execution.

The Dove is a reconstruction of a 17th century trading ship and named after The Dove that brought some of the early settlers to Maryland. It is important to note that the blueprints to the original Dove have been lost, but it is fair to say that it would have been similar to this vessel. If you arrive at the right time (12 noon when I visited) you can watch a demonstration of how 17th century settlers would have navigated the waters. Needless to write, it all looked very complicated and since I get lost with GPS, had I been in charge of anything on the ship they never would have made it to Maryland. The reconstruction is an actual sailing ship that they often take out for trips on the bay. If you volunteer working on the ship they will take you out on their trips. 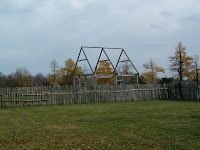 Not every structure has been completely reconstructed. Wooden frames have been put out along the grounds to give the visitor some of idea of what the place would have looked like. A fair amount of trees are present on the property, but I was told by a guide that the early English settlers would have removed most of the trees in the city limits. They could not do this today as the area is a watershed and there is a state law against removing trees in a watershed. 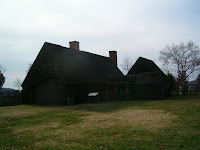 Other structures have been reconstructed on the grounds. In some of them there are guides who will answer questions. Others have placards that display information about the history of the area. 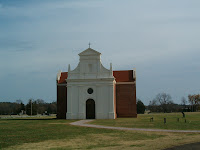 A reconstruction of a Catholic chapel is at the site, demonstrating the importance of religion to the lives of the early settlers. The ruling Calvert family was Catholic, but the majority of early Marylanders were Protestants, including Puritans who were fleeing from religious oppression in Anglican-ruled Virginia. Maryland was more tolerant than most places at the time, but only towards trinitarian Christians. Blasphemy was a capital offense, although there are no recorded executions for it. 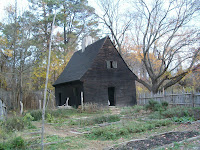 A brief walk from the main part of the park will take you to the Tobacco Plantation. The staff at this location act out the roles of 17th century people working on a tobacco plantation. They will show you around the farm and answer questions about the period, as if they were actually still living there. It is a little bit weird at first, but sort of entertaining. 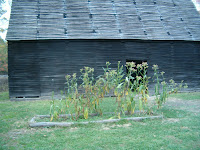 I was a bit surprised, but happy to see, that they actually were growing and curing tobacco, despite the fact that it is a State park. Maryland can be such a horribly "liberal" (actually authoritarian) state and many would love to tax or prohibit tobacco out of existence. Many have the rather fascist view that you are not smart enough to decide what substances you should ingest, whether that be tobacco, marijuana, or trans-fats. I almost didn't want to post pictures of the growing tobacco out of fear that some mentally challenged legislator might seek to introduce legislation requiring them to remove the tobacco from the tobacco plantation in some sort of Stalinist purge. 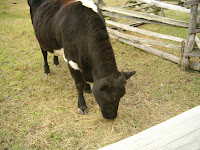 On the farm you will also find live farm animals, including pigs and cows. The actors will answer your questions about everything related to the property. You will find out how people became indentured servants, how they could eventually own their own land, the origin of the term earmarks, or anything else that you wanted to know about 17th century farming. Around the plantation there are also lots of trails that will take you around the surrounding woods.

Parking at the location is free and there are plenty of available spaces. It closes down in the winter, but opens back up in the spring. Check the Historic St. Mary's website for details. Entry to the State park was $10. There was a nice gift shop there as well, although I didn't buy anything.