Maryland, as readers of this blog know, has a rich history involving strange stories, characters, legends, and locations. It should come as no surprise that writers would seek to collect these tales and put them together in book form for the masses. One writer, George G. Carey, did this and did it well in his book, Maryland Folklore.
Published in 1989 by Tidewater Publishers, cheap copies of the book can be purchased online or sometimes found in used bookstores. I picked up my copy from Back Creek Books in Annapolis.
Carey, who was once Maryland’s State Folklorist, had previously written two books, Maryland Folklore and Folklife and Maryland Folk Legends and Folk Songs. At the request of his publisher, he updated both and combined them into this book.
Divided into six chapters, the author writes first about Folktales and Tall Tales, then Legends, Folk Heroes and Local Characters, Urban Legends, Shorter Forms, and finally about Material Culture. Each chapter is then broken down into different sections.
The first chapter on Folktales and Tall Tales is broken down into sections on Storytelling and Storytellers and then into Folk Narratives.
Carey wrote about the history of storytellers and about some individual storytellers from Maryland such as Captain Alex Kellam from Smith Island. Kellam was a waterman turned insurance salesman. He would hang out around local bars in Crisfield to tell stories and tall tales. “He often acted out his stories with facial grimaces, hand gestures, dialectical innovations, onomatopoetic sounds, voice alterations. He laced his yarns with jingles and rhymes, and would from time to time break into song.” Carey was so impressed with Kellam that he brought him to speak to undergraduates at Yale when he was teaching a course there in 1982.
In his Folk Narratives section, Carey wrote about several tall tales and stories that were told in the area. Some were fairly amusing with good punch lines. Others, less so. But Carey’s job as a folklorist is not to only preserve the amusing or good stories, but all that were being told.
The second chapter on Legends, Folk Heroes, and Local Characters is perhaps the most interesting part of the book. It is broken-up into sections on Places and Events, the Devil, Witchcraft, and Treasure Legends.
In the places section, Carey wrote about typical legends of bloody prints being left at places where people died, especially if they had been murdered. The stains could never be permanently removed. Ghosts also stalked houses were terrible events were said to have taken place. For example, he wrote that “[a] home in Midland afforded a much more gruesome tale. On Paradise Street there, a young husband took a butcher knife and killed his wife and children before he turned it on himself. As late as 1950, people in the area swore that a figure appeared night after night in the doorway of the room where the murders took place. The figure always carried a knife and his features seemed demonically possessed. Inexplicable screams also issued from the residence and startled nearby neighbors." Whether or not such a house exists or did exist or if anyone was murdered there, I have not yet been able to determine, but plan to work on finding out.
The section on the Devil dealt mainly with tales of people from Maryland who were said to have sold their souls for material gain. One such person was a man from Crisfield named Skidmore who not only prospered greatly, but was able to work magic against his enemies.

As the author of Witch Trials, Legends, and Lore of Maryland, I was most interested in Carey’s section on Witchcraft. Carey explained how social outcasts, especially if they were women, could come to be seen by society as being witches. He used this to explain the popular legend of Moll Dyer from St. Mary's County. Carey also told the story of a "typical" witch, this one from Crisfield, "Old Aunt Hanna". She threatened to put spells on people if they angered her. Another alleged witch, Henny Furr, was a black woman who lived in Mount Vernon on the lower Eastern Shore. She bewitched dogs that went onto her property, poisoned people, and engaged in other disturbing behavior until she met with a mysterious end. Carey also wrote about the methods that people used to protect themselves from witches.

The Treasure Legends section addressed the various stories about buried treasure, especially around the Chesapeake. It was thought that Captain Kidd may have buried treasure at any number of locations around the bay. Many others buried their fortunes as well. Sometimes a ghost would haunt the treasure to keep others away. These ghosts must be effective at their jobs because no large treasures are known to have been recovered in the area.

The chapter on Folk Heroes and Local Characters is about amusing local people of old, such as "Lickin' Bill" from the lower Eastern Shore. Bill earned his name because he tended to lick various things around town with his tongue. A large man who never lost a wresting match or game of strength, he was also known for being a devout Methodist and for his wit. An inability to get his clothing properly tailored resulted in the humorous scene of him "going to church with his pants legs just below his knees and his coat sleeves up to his elbows." Other tales are told about other amusing characters, most of whom must no longer be living and who would have been mostly lost to history, but for this book. 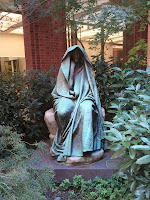 Carey's chapter on Urban Legends starts off with some general stories about mishaps with fast food, trips to Mexico, escaped killers, and other tales that are not necessarily connected to Maryland, but are said to have also taken place here (and lots of other places). Black Aggie from Druid Ridge Cemetery in Baltimore is covered in some detail by the author. For a few decades in the 20th century, this ominous-looking statue invoked fear in the hearts of many. Children and college students would constantly trespass onto the grounds of the cemetery to sit on her lap, if they had the nerve, until it was removed from the grounds in 1967. The book's author would not have been aware of this, but for anyone seeking her, Black Aggie currently sits in the courtyard of the Federal Circuit Library, which is located here. Although there is no security to the courtyard, I'm fairly certain it is not a good idea to jump onto Aggie's lap. The US Marshalls inside might have some sort of a problem with that.

Carey's chapter on Shorter Forms is broken into sections on Traditional Speech and Names, Proverbs and Proverbial Speech, Riddles and Tongue Twisters, Children's Games and Traditions, Folk Belief, and Folk Magic. Many of the speech patterns and sayings have continued to today and some didn't seem especially connected to Maryland, such as the saying "as easy as pie." The sections on Folk Belief and Folk Magic could probably have been merged with the section on witchcraft in the previous chapter as the subjects are essentially the same.

Finally, Carey's chapter on Material Culture is divided into sections on Folklife, Foodways, Screen Painting, Rug Weaving, and Boatbuilding. Most of this book is focused on the eastern and western parts of Maryland, but the section on Screen Painting is exclusively about Baltimore City. Screen Painting became a popular form of art in Baltimore in the early 20th century. Although declining in popularity the last few decades, there is an organization dedicated to the art. Screen Painting may be on the way to making a comeback.

Maryland Folklore is a amusing book about Maryland's lost or forgotten art, culture, history, and beliefs. I recommend trying to find a copy.

Posted by William Cooke at 1:21 PM No comments: