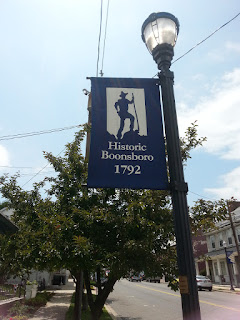 Boonsboro is a small town located in Washington County, Maryland, just off the South Mountain. According to Boonsboro's official website, the town was "[f]ounded in 1792 by George and William Boone, cousins of Daniel Boone . . ." With a population under 4,000, the town is fairly small. Nevertheless, it is steeped in the history of the Revolution, the Civil War, and the culture of the South Mountain. 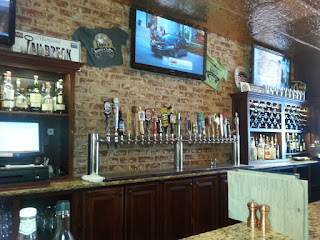 Arriving over the weekend, the first place I visited was Dan's Restaurant and Tap House, which boasts of having 24 craft beers on tap. I had a few of the beers, including their Dan's Gateway Gold Lager, which is brewed exclusively for them. The beer was great. So was the atmosphere. I had no complaints about the service or the food. The prices were about what you would typically expect from a craft beer bar. While there were other places around to eat, this appeared to be the popular watering hole. 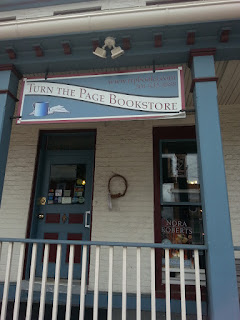 Leaving the bar, I made my way over to the Turn the Page Bookstore. The bookstore is owned by the husband of best-selling novelist, Nora Roberts and thus has a many copies of her books for sale. It also has a wide selection of books about Maryland history and folklore. I purchased a copies of South Mountain Magic: Tales of Old Maryland and Haunted Ocean City and Berlin. They also sell copies of my book, Witch Trials, Legends, and Lore of Maryland. I mail them copies a few times a year and they mail me back checks. They are nice to deal with. In addition to books, they also have, to quote their website, "jewelry, soy candles, handmade soaps, gifts and Organic Fair Trade coffee beverages" for sale.


I would say that the main attraction in the town is The Boonsborough Museum of History. This private and free museum offers a unique collection that covers almost everything including mummified birds, religious relics, and weapons from ancient history to confiscated shivs from the State prison in nearby Hagerstown. The owner, Doug Bast, will happily give you a free tour where he will proudly show you the items he has acquired over the years. Despite the fact that he is badly suffering from Parkinson's Disease, he is extremely enthusiastic about his collection, especially his many macabre items, including a severed arm from the Civil War, children's coffins from the Victorian period, and a desk made out of wood from the scaffold John Brown was hanged on. Tours are generally given on Sundays, but you can call ahead to schedule one. Donations are greatly appreciated.

On your way out, or into, town, there is the real Washington Monument just a few miles away. First completed in 1827, before Baltimore's Washington Monument was built and well before the one in DC was even conceived, this monument was allegedly built in one day on July 4, 1827, by the citizens of Boonsboro in a patriotic fever. Of course, the original structure had some problems and was worn down over time. In the 1930s, the structure was mostly rebuilt and that is what you see today. Located along the Appalachian Trail, on the South Mountain, it is only a very short hike from the parking lot. A few steps on the inside will get you to the top where you will have an amazing view of the surrounding area. This area is a State Park and there was a small admission fee based on the honor system, which most people appeared to happily ignore.

There are other attractions in the area, such as the Antietam Battlefield, South Mountain Battlefield, and Gathland State Park.