I have been contacting bookstores across the State to let them know about my book, Witch Trials, Legends, and Lore of Maryland. So far, Back Creek Books in Annapolis and Fenwick Street Books in Leonardtown have agreed to carry copies. Last week, Mystery Loves Company in Oxford also asked for a few copies. So, I got into my car, turned on my GPS, and drove out there. 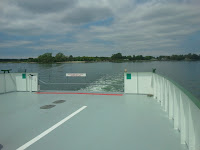 Although I had looked on a map, I was surprised that my GPS took me to the Oxford-Bellevue Ferry in Bellevue. My initial reaction on seeing this was 'funny, I don't remember Oxford being an island on the map'. I purchased a ticket with a check and was bemused when asked if I wanted a return ticket. Did they think that I wanted to stay there and never leave? I thought. Of course, shortly thereafter I discovered what I had previously thought. Oxford was not an island, but the ferry was a "short cut". Although when you consider wait time, the ferry probably isn't much shorter. It is only a few extra miles to go by land. But it was sort of nice and I remembered being on this ferry many years ago with my parents. It was likely the same boat. I wouldn't take the ferry again to drop off books (it was $18 round trip), but it was sort of interesting.

Oxford is a nice little town. It was founded in 1683. In 1694, it and what would become Annapolis, were named the only official ports of entry for commerce in the then province. It was a prosperous port town, sending tobacco all over the world. 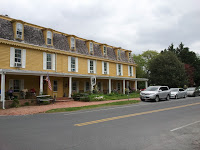 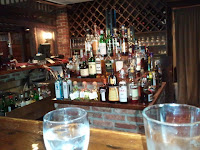 There are several places to eat in and around the town. I stopped at the Robert Morris Inn which bills itself as "America's Oldest Inn". They alleged that it started operations in 1710. I actually ate at the connected Salter's Tavern, which is for more casual dinning. The service was okay. The food was decent, but sort of overpriced. They only had two beers on tap and they too were overpriced. Other than that, I can't complain. If one wanted a cheaper and better meal, one could find a WaWa or Royal Farms up the street somewhere. But at these places you are paying for the history and atmosphere as much as anything. It seemed to have plenty of that. I'm sure there is probably a ghost story or two associated with the establishment as well. If not, then someone should invent one. 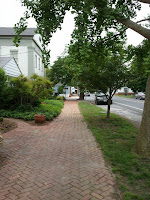 The streets of Oxford were pleasant to look at and enjoyable to walk. There was a small museum that might also be worth a visit and other small corners to explore. But after half a day, it would probably become rather boring to the average tourist. I would recommend a visit to the town, if it is not too much out of your way. And if you do visit, stop by the local bookstore to buy a few things, including a signed copy of my book.
Posted by William Cooke at 5:00 PM 1 comment: