My interview with the Annapolis Podcast

The other day I had a chance to sit down with Scott MacMullan, who runs a popular podcast called the Annapolis Podcast.

Scott asked me about my work with Law Enforcement Against Prohibition, my views on some local issues, and then quizzed me (unexpectedly) on Roger B. Taney and the Dred Scott case. I got a few of the details about the Scott case wrong (for example, it was a 7/2 decision, not 6/3 as I said), but I was close.

I enjoyed talking to Scott and wish him good luck with his podcasting.

You can listen to the show here:

Drugs and Dred Scott in Annapolis
Posted by William Cooke at 10:51 AM No comments:

There is plenty of real history in Washington, DC, but in the Georgetown neighborhood, there is movie history as well. The Exorcist Steps are worth a quick visit. Everyone who has seen The Exorcist, remembers the scene where the priest fell out the window and down these steps. 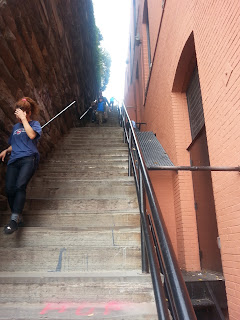 This tourist attraction is located at the corner of Prospect St NW and 36th St NW in Georgetown. It is not uncommon to find people exercising on the steps. When I visited, there were two people running up and down the stairs non-stop. Another woman was walking them as exercise. She seemed annoyed to be in one of my photos, but that's what you get for exercising on the Exorcist steps. It is a popular site and people love photographing them. People also love going up and down them. So good luck getting a decent photo without people on them.

The Exorcist was based, somewhat, on an alleged case of possession of a boy in nearby Maryland. Whether the boy was actually possessed, is a matter of debate. Of course, this location has nothing to do with any real exorcism or haunting, but it is still pretty interesting to visit. 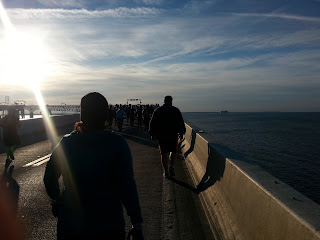 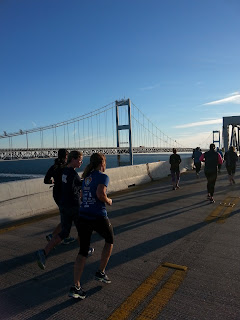 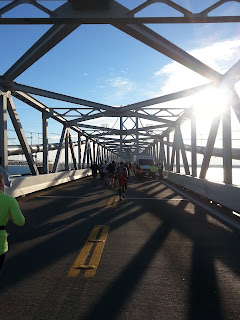 Overall, I was happy with the race and, despite my complaints, plan on signing up to run again next year. It is difficult to organize a race this large, but they did a sufficient job.
Posted by William Cooke at 7:38 AM 2 comments:


Harpers Ferry, West Virginia, is a quick drive from most parts of Maryland. For example, leaving from Annapolis, it takes less than an hour and a half, assuming traffic is reasonable. Parking there can be a bit of a challenge. You can try to park on the Maryland side near Sandy Hook and walk over the footbridge into the town, but there are few spots at this location and they are almost always taken. There is some parking in or near the town, but free spots are hard to come by. Although it takes a few minutes longer, your best bet is to drive through the town to the visitor's center, which is about two miles away. Parking is plentiful there, but it costs $10 (at the time of this writing). The Park Service runs buses all day to bring people into town. It costs nothing more to ride the bus. You can also run/walk into town on a trail.

As the name would suggest, Harpers Ferry was first founded in 1734 by a man named Harpers who later ran a ferry at the location. The town was officially established and named by the Virginia Assembly in 1763. Located on the Appalachian Trail between the Potomac and Shenandoah rivers, the scenery is unmatched. Thomas Jefferson, when passing through the area, remarked, in part, “This scene is worth a voyage across the Atlantic.”

When most people think of Harpers Ferry, they think of John Brown's ill-fated raid in 1859. Before the Civil War, West Virginia was still part of Virginia and part of the slave-holding south. Brown was a radical Christian who was opposed to slavery. He could easily be called a terrorist. Brown and his followers attempted to seize the arsenal at Harpers and then start a slave revolt. It was an insane plan that had no chance of succeeding. It was a suicide mission for Brown and most of his 21 followers. Many died in the raid. Brown and the other survivors were captured and most were later executed by the Commonwealth of Virginia. Five men escaped and were never captured.

West Virginia succeeded from Virginia after Virginia succeeded from the Union. Nevertheless, there were still mixed feelings in the area. A historical marker there claimed that the Catholic Church in town, St. Peter's, which had an Irish pastor, flew a Union Jack during the war to avoid taking a side. Ireland, at the time was in union with Great Britain, so that would have been the priest's national flag.

Today things are much more peaceful in Harpers Ferry. During the summer, people enjoy tubing and boating in the area. In the town there are living history exhibits. There are more than a few places to enjoy a drink, including at The Town's Inn, where they have some local microbrews on tap. There is also a ghost tour that runs at night. I would have taken more pictures, but I was enjoying the view too much to be bothered.
Posted by William Cooke at 6:50 AM No comments: