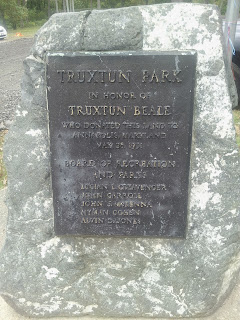 The 'witch's grave' in Truxtun Park.
Posted by William Cooke at 8:01 PM

The "witches grave" on the hill overlooking the recent ball field and Hilltop Lane is not. It is, in fact, a vault for one of the Woodward/Hessilius family. John Hessilius (1728–1778), the famous potrait painter, "married the wealthy Annapolitan widow Mary Young Woodward, whose husband owned "Primrose Hill,"(built c.1750)(across Hilltop Lane) where he soon moved in with her. He became more involved with his local parish, St. Anne's Church in Annapolis. He is also shown to have sold numerous properties throughout the Annapolis area. Nick Christhilf

I realize I am about four years late to respond to you but that house/land was a farm owned by a doctor. They named it milkshake lane after one of his dogs named Milkshake. I believe his children sold the land after they inherited which is why it is more developed now.