Born in Baltimore in 1880, Henry Louis, or H.L., Mencken rose to become a prominent journalist, critic, reviewer, and social commentator (among other things) in his day. A prolific writer, he authored several books and countless essays, articles, and letters. It is fair to call Mencken a libertarian. He was influenced by many great minds, including my favorite philosopher, Herbert Spencer.

Many today are unaware of who Mencken was and how he and his ideas influenced his world and the world we live in today. The Mission of the Friends of the H.L. Mencken House is to educate "the public about the life and legacy of H. L. Mencken." To this end they are interested in purchasing, or at least permanently leasing, Mencken's house to establish a museum to teach others about Mencken, his life, ideas, and times.


The Mencken House, where H.L. lived all but 8 years of his life, and where he died, is only opened today for private tours and special events. I had the opportunity to visit the house during one of those events.

Located at 1524 Hollins Street in the Union Square area of Baltimore, the neighborhood could use some work. I spotted at least one drug deal while driving away. I would advise against leaving out any valuables. But it is safe enough, especially during the daytime and especially if you park near the house. Parking is generally not a problem. 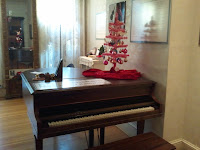 The house is more empty than it would have been when Mencken lived there, but, they try to give a feel, based on old photographs of it, of what it would have looked like then. 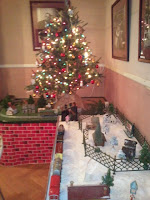 The house was properly decorated for the Christmas season. Although Mencken was a famous agnostic who had no interest in religion, he, unlike so many professional atheists today, enjoyed the cultural aspect of the Christmas holiday. In his youth especially, Christmas was an important day for him and his family. 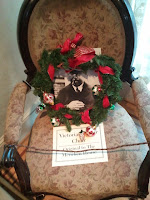 An original chair from the Victorian period was preserved for the house. Other items that belong in the house are apparently in storage elsewhere. Hopefully they will be returned to the house. 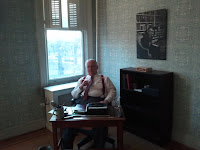 On the second floor, if you visit on the right day, the ghost of H.L. Mencken himself, still thinking it is the past, will greet you and talk about his life, views, work, and times. Also, if you would like H.L. to come to your event or party that can be arranged as well. 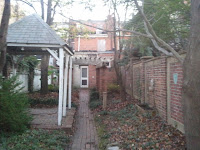 The garden in the back of the house is worth exploring as well. Original artwork in the walls is still present. View some samples of that below: 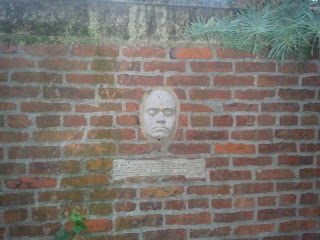 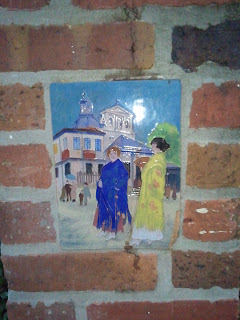 H.L. Mencken was an amazing individual who fought, though his words, for the rights of all people, even when that was unpopular. Below are some of my favorite quotes and links to books by and about Mencken. Those interested in learning more about him and his ideas as well as saving the Mencken House should join the Friends of the H.L. Mencken House and also visit the house.

"The trouble with fighting for human freedom is that one spends most of one's time defending scoundrels. For it is against scoundrels that oppressive laws are first aimed, and oppression must be stopped at the beginning if it is to be stopped at all."

"Democracy is the theory that the common people know what they want, and deserve to get it good and hard."

"The most dangerous man to any government is the man who is able to think things out for himself, without regard to the prevailing superstitions and taboos. Almost inevitably he comes to the conclusion that the government he lives under is dishonest, insane and intolerable, and so, if he is romantic, he tries to change it. And even if he is not romantic personally he is very apt to spread discontent among those who are."


"Every time the papers print another account of a Prohibionist agent murdering a man who resists him or searching some woman's underwear or raiding a Vanderbilt yacht or blackmailing a Legislature or committing some other such inordinate and anti social act they simply make a thousand more votes for Prohibition. It is precisely that sort of entertainment that makes Prohibition popular with the boobery. It is precisely because it is unjust imbecile arbitrary and tyrannical that they are so hot for it. The incidental violation of even the inferior man's liberty is not sufficient to empty him of delight in the chase. The victims reported in the newspapers are commonly his superiors he thus gets the immemorial democratic satisfaction out of their discomfiture. Besides he has no great rage for liberty himself. He is always willing to surrender it at demand. The most popular man under a democracy is not the most democratic man but the most despotic man. The common folk delight in the exactions of such a man. They like him to boss them. Their natural gait is the goose step."

Posted by William Cooke at 1:06 PM